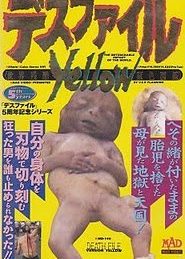 FILM– If you’re familiar with the Death Film genre, then you know what to expect. Nothing more than amateur footage of gross, gory scenes of actual death. Death File Yellow is one of the nastier entries, and contains such highlights as an infant autopsy, disaster footage, and multiple crime scene videos. Unlike it’s title might suggest, Death File Yellow also has some non death related Mondo footage of transvestites, bizarre rituals and mutilations, and the graphic depiction of birth.

Death Films were spawned after the success of Mondo Cane. People wanted edgier and more taboo subjects, and eventually we ended up with this offensive genre. It’s only appealing to a few, and in all honesty I’m not a huge fan; however when I get in the mood to watch these films, I want to find a good one, which sounds easier then you think.

As a tape collector (epically extreme Japanese tapes) I knew I had to have this. Death Films are a hit and miss. Either you get something good (Orozco the Embalmer), something bad (Traces of Death), or just plain shit (Facez of Death 2000). Luckily, Death File Yellow was something special. All the death footage is nasty, and all the Mondo footage is entertaining. The pain ritual is hard to watch- a man literally almost cuts his tongue off with Noodle knives. The infant autopsy, gloriously displayed on the cover of the tape, is one of the nastiest things I have ever seen. Fair warning- this tape is not for the weak hearted.

Now here’s what makes this tape worth hunting down- the narrator. There’s no subs, so you don’t know what the Hell he’s saying, but the way he pops up is utterly hysterical. It’s like they filmed him in front of a weatherman’s green screen, and just super imposed him over the death footage to describe what you’re seeing. He tries to act all cool and jaded, but the way he is imposed (sideways to the audience) is so ridiculous and stupid that you’ll be cracking jokes before you realize it (I think the best was my friend- "Asian Alfred Hitckcock Presents: Fucked Up Death Shit")

If the concept of watching some pretty messed up footage for 45 minutes, and cracking an occasional one liner with friends at the narrator interests you, then look this film up. After all, one of the only reasons people watch Death Films are so they look macho to their friends, so why not get a group together and see who will outlast the others? There’s also a second volume- Death File: Black Version (EDIT: actually there are multiple Black volumes, plus a regular “Death Files” series), which I hear is just as sick. VHS collectors, people who like to scar their minds, and just general sickos should enjoy this film, and as all three of those, I can say Death File: Yellow Version was worth hunting down. 8/10

Take a break from the disturbing and relax with some free games. Visit BonusPromoCode.com and redeem promo codes for free chips!