There’s Nothing Out There Movie Review 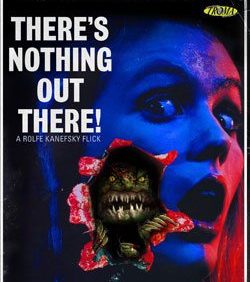 The Film– The film begins with a video store clerk being attacked by a creepy customer. After he begins to throw tapes at her, the clerk suddenly jolts from her dream (holy shit, I never would have guessed this was a dream sequence!) only to realize she was driving. Well since sleeping and driving mix as well as nail guns and meth, she crashes the car.

As fate (and by that I mean the film makers) may have it, an alien creature crash lands in a mud puddle about three inches from the car. After realizing how tasty (and goddamn stupid) humans are, the toothy creature has his first snack on earth.

So now that the typical "first-victim-dumb-bitch" has been dealt with, we meet our main characters. A group of three high school couples and their obnoxious friend are going to head out to a summer home in the woods for the weekend. On the way to the house, the horror movie buff, Mike, notices police investigating the crashed car from the night before. Immediately he flips his shit.

For this guy to know so much about horror films, he’s the most terrified, paranoid character I have ever seen in a movie. For the rest of the trip he just rambles on and on about how they’re all going to die. The couples decide to sneak off and actually enjoy their night when SURPRISE- the creature attacks.

Seeing as how the first victims were in the woods alone, everyone thinks they’re just off fooling around. Well, Mike has taken this time to don a full set of hockey gear to protect himself from whatever will inevitably attack. Unfortunately for him, his friends think he’s trying to act out some kind of horror fetish, so they lock him in the basement.

Come morning, their friends are still missing, Mike has broken out of the basement, and there’s green slime all over the place. On his way out of the basement, the bumbling idiot broke a water pipe, so one of the guys sets off to find a plumber. With the car gone,the remaining friends are left to fend for themselves when the alien attacks again; but, turns out Mike has survived the night- and actually found some masculinity! Guiding them with his endless horror knowledge, Mike and the group try to fiend off the hungry invader… With shaving cream…

Right off the bat this movie sets its tone. The cliche dream sequence in the video store is just awesome, if not equally dull. Most know I’m a big VHS guy, so seeing walls of horror tapes thrilled me in a nostalgic way. For people like me, this is a scene what will make you smile, for others, it might just seem pointless and dumb.

The characters in the movie are pretty like-able. Mike, despite his constant bitching, is a funny guy. He provides about 90% of the comedy, and most of it is spoofing horror. Almost everyone else either dies, gets nude, or both, so don’t get your expectations higher than they should be.

Here’s one problem I had, the movie has a scene where a group of generic 90’s punks roll up and skinny dip in the pond near the house. These characters should be nothing more than food to the monster, but all they do is playfully bitch at the main character. They feel like stock comedy characters, and when you have a comic relief that’s already decently strong, it just feels pointless to even have these people on screen. It seems like Kanefsky just asked some friends if wanted to be on screen in his movie and they said yes… or just to up the tit count (hey, this is a Troma movie).

The gore is silly, the monster looks like a rubber frog puppet crossed with the letter Y, and out of nowhere it suddenly has about three extra ways of killing people that were not even hinted at before. In all honesty though, about five minutes after this, a character uses the boom mic to swing to safety, so plot points aren’t exactly strong. The film is goofy and stupid, but that’s the point. I personally loved it. It reminded me of a simple 90’s cheapie like Killer Condom. If you like Troma, then you can’t go wrong with this one.

The Package– The 35mm print Troma used looks really good. It’s a little soft in some places, and a bit splotchy, but all in all a solid, decently clean transfer. My disk had one little hiccup where the picture went fucking haywire for a second, but this looks like an encoding problem. Not sure if it was just my disk or if it’s going to be in all, but I figured I should note it.

The audio is a balanced track, but it sounds a little flat in some places. There’s no volume problems or major distortions (the already mentioned hiccup does make the audio squeak). It’s not going to blow you away, but it works just fine.

The first disk comes with the trailer, which you can also watch with commentary by Kanefsky, an introduction by him, as well as Kaufman, two commentaries, and the Tromatic Extras. Disk two contains Rolfe Kanefsky’s short Mood Boobs (as well as a making of), his first short Just Listen, a music video, screen tests and auditions, pre-production footage with storyboards, rehearsal/ blooper footage, animation tests, and production stills. The coolest thing on the disk is Just Listen, which is a dirty, muddy looking super 8 film with some great cinematography. It’s the film playing in the video store scene.