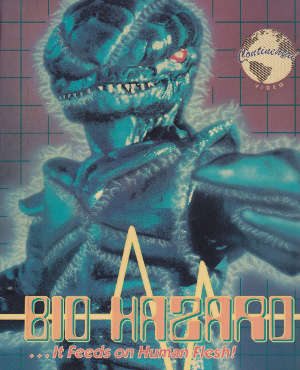 The Film– Biohazard begins with an experiment in the desert, at a secret military base. Supposedly one of their psychics, Lisa, has tapped into another galaxy; and can retrieve artifacts from them. They begin to test her powers, and bring back a small, metal chunk that looks like a coffin. After the experiment, the military begins to transport the object to another base for further examination. Well the fan hits the shit, as can be expected; turns out there was an alien in that thing. By alien I mean a 5 foot Power Ranger reject of a monster. So of course the monster begins to terrorize the town, and why not. He has pincers for hands, and one bite injects something that causes you to foam at the mouth and die. The military tries to correct the problem, but seeing as how they caused it, nothing is accomplished at all. Eventually the monster finds his way back to the base, and after some of the most God awful twists in film history, this piece of junk ends.

Yes, I hate this movie. Really, really hate it. But, I also love it. Why do I love it, you ask? Because it’s the first film to get me into horror. Way back in the early 90’s, I remember this VHS sticking out like a sore thumb at my local rental shop. I rented this puppy many, many times; yet forgot about it existing till a few months ago. I found a mint copy on eBay, and fell in love all over again.

The monster looks nothing like the cover. In the film he’s black, not electrically charged, and tiny. This cover makes him look like something that Godzilla would demolish. The ending is really one of the worst things I have ever seen. The monster’s death is so anti-climatic, and right after that, there’s a “twist” ending. The ending has no build up, no reason, and is just stupid. It’s so stupid the director can be heard yelling “CUT” in the background; and the actor looks at the screen bewildered. It’s a double kick to the gonads; like waking up from a party covered in vomit AND with the worst hangover you can imagine. Yet, same as the drinking metaphor, you choose to watch it; same way you choose to drink, despite the consequences.

I choose to watch this film, and keep it as a center piece in my collection, because it’s what sculpted me. It reminds me of that gilded VHS shop, which has been gone for years now. It reminds me of a time when covers could scare me; yet movies now fail to. It reminds me of why I like horror so much; because it’s fun. All I can say is pick up the VHS, or bootleg DVD, and give it a try if you like schlocky things like this. You’ll probably hate it, and I know that. It just comforts me to have a copy, and reminds me of the good times.