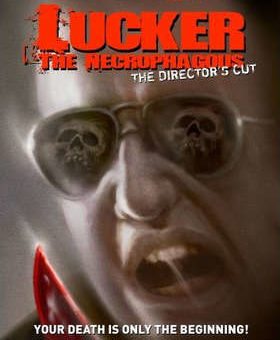 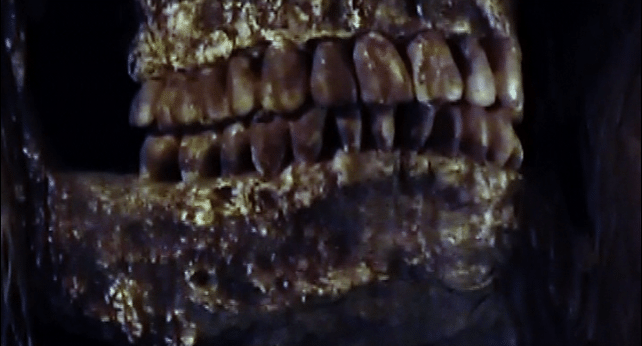 The Film– Murderer/necrophiliac John Lucker had just attempted suicide, and was transferred to a private hospital for recovery. His sedatives wear off a little too early, resulting in his killing of a few hospital workers, and escape. After getting his rocks off with the corpse of a nurse, Lucker takes her aviators (his signature look), dons some hip leather clothing, and hits the streets.

Turns out Lucker has been behind bars for years, after killed eight people over the course of eight years, Only one person survived his rampage, Cathy Jordan, and after hearing of her recovery on the radio, sets out to correct his "mistake". However, Lucker is an easily distracted person- his impulses keep him from going straight to Cathy. He finds himself hunting for sexual partners, and after a few quickies, John finds his golden girl. After killing a prostitute in her apartment, he turns on the stove to hurry up the decomp cycle, and after a month she’s ready for love.

After Lucker finishes with his slow-cooked-side-project (who happened to live in the same complex as Cathy), he returns to his main goal. With no one around to protect her (or any other girls in the apartments for the matter), Lucker begins to tie up his loose ends- literally.

Lucker the Necrophagous is a tortured film. It was made to get back at the Belgum government, as an act of revenge. It was meant to shock and disgust, which it does, but it work a little too well. The film negatives and positives were purposely destroyed by the vengeful producer, and for years this movie only existed on a Dutch master VHS. Director Johan Vandewoestijne hunted years for sources to re-create his film, and after working his ass off, we now have the Directors Cut of Lucker.

After seeing Nekromantik and Aftermath, I was eager to get a hold Lucker. When I rented it a few years ago, it did nothing for me. The print was rough, the audio dub seemed goofy, and overall it was boring to me. At that time I was just exploring films for the sake of gore, and in all honesty completely missed the point of all three films. After re-watching the aforementioned movies, I was eager to revisit Lucker, and I’m glad I did.

Lucker is much more than just an exploitation film. The cinematography is excellent, even on the most disgusting scenes. Vandewoestijne was able to use angles, shadows, and light to turn a simple slasher flick with a corpse-fucking twist into something that looks like it came from "Argento’s Lighting School".

Now don’t get me wrong, this flick is packed with blood and gore. There’s stabbings, dismemberments, slimy corpses, and one scene where Lucker licks fermented vagina juice off his hands. It’s enough to make your guts tighten to say the least.

As I was saying earlier, the film print of Lucker has more stitches than Frankenstein’s Monster. It’s been sourced from two VHS, some deleted film negatives that avoided destruction, and some re-shot footage. Sometimes the film is hard to watch, and one scene towards the end has some of the most unbearable audio I have encountered. You can tell what material was used for each scene, and some people will not be able to handle this.

It’s far from Blu-Ray, it’s far from perfect, but Lucker is a demented film about a demented man- and yes, at time it’s hard to endure (for various reasons). At least give it a watch, and try to understand the history of the film before you attempt to rip it to shreds.

The Package– Lucker is not for HD buffs. Synapse has done all they can with what they have, but unprotected film and VHS tapes are not going to yield perfect picture quality. The Directors Cut that’s made up of multiple sources does have some hefty damage. It looks soft, the colors get lighter and darker (depending on which print was used), and there’s enough grit to fill a sandbox. It does enhance the films dirtiness somewhat, but I will always be curious to know how Lucker looked before it aged worse than the prostitutes corpse in the film, but we’ll never know. Understand that this is not negligence, it’s just how things worked out.

The audio is the same as the picture, only you really can’t tell it’s from several sources. There’s not a huge amount of difference when the medium changes to another source, but at the same time it’s still not the best quality. Like I said earlier, they worked with what they were given. Some of the screaming effects get REALLY annoying in the last half of the movie, and the dubbing can be goofy at times, so watch out for those things. Aside from those minor issues and the decent quality, Lucker is easily a watchable (and listenable) film.

Synapse Films only included two extras, but that’s like saying I have only two $100 bills. The first is a half hour interview with Vandewoestijne, where he tells all about Lucker. From his influence in making the film to it’s troubled history, it’s all here. The second is the original VHS cut of the film. It’s taken from the master tape, and has burned in Dutch subs and low quality, but it’s the only way to see the original cut of the film. Amazingly the Directors Cut is quite different, so this is a welcome addition.