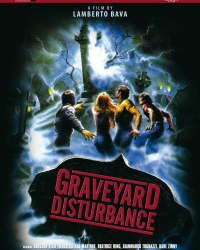 The Film– A group of delinquent teens in a tricked out van (painted with a mural of crazy posters, including the skull from Argento’s Inferno and the dragon rider from Heavy Metal) steal some snacks from a convenience store, and hit the road to go camping. After the cops attempt to corner them, they speed of down an unfamiliar dirt road, heading into the backwoods. After seeing a ghostly horse- drawn carriage, along with a demonic hiker in a raincoat, the teens find the road passes through a river. Of course the wise thing is to drive through the river- which is what our intrepid leader does. This results in the van becoming flooded, so- determined not to let the stupidly self inflicted car trouble spoil their fun- the teens set out on foot.

Hunting for a good camping spot before dark, they suddenly find large animal tracks on the ground- and some of the woodland inhabitants begin to howl. This hastens the group’s hunt for shelter, and they soon find a crumbling, glowing, foggy church. Location found! After tucking in for the night, the eerie hiker from the woods appears, and awakens the teens. Turns out he owns a tavern that’s in the basement of the church (what?), so our not too bright friends decide to order themselves a plate of food and a nice pint.

The tavern owner informs the teens that whoever can make it a night in the tombs and catacombs below the church will win a large fortune- but that no one has ever returned from the challenge. The hot shot of the group steps up to the plate, and they agree to spend the night in the caverns below. Once everyone is locked in for the night, the coffins begin to shake and move- turns out the inhabitants of the tombs weren’t in the mood for company…

Ah, where to start. First off, this is one of the weirdest movies I have ever seen. There’s zombies, werewolves (maybe?), mutants, and an eyeball monster that was pulled right out of Star Wars. It’s a very mix mash film that, in all honesty makes no sense at all. And that’s why I love it!

From the first few minutes, you can tell this is one of Bava’s crazy movies. It makes no sense, has a twist you can see from miles away, and is full of cheesy effects- but he pulls it off. It’s obvious that Bava did this as more of a fun movie than an original horror flick (he even pays homage to his own Demons 2, which is playing on the TV in the tavern).

I personally love dreamlike films- the ones that don’t make any logical sense, yet you still believe everything you’re seeing. Graveyard Disturbance is just like that. It seems like a greatest hits montage of Mr. Bava’s might terrors- which is one Hell of a selling point. Together with it’s foggy atmosphere, sense of decay, and genuinely bizarre (if not a little too simple) plot, this little made-for-TV flick is actually pretty fun. On an ending note, gorehounds beware- there’s not a drop of the red stuff thought the entire film.

The Package– I’m always nervous when I pop in a MYA disk, because there’s not much of a middle ground. Either it’s going to be a great transfer, or a crappy one. Thankfully, this time we get a very nice, crisp and clear transfer! Sure there’s the occasional grit and damage here and there, but the colors, saturation, and tones are spot on! This was sourced from a quality print, and you can tell some hard work went into this release.

The English audio is pretty good, but there’s the occasional damage here and there. The major setback is the distortions are loud, and once you hear one your ears automatically try to pick up others. There’s only about half a dozen noticeable pops, and the volume is decently consistent. I can assure you this is a huge step up from that inferior PAL disk released a few years back by Marketing Films.

On to the extras, or lack there of. I would have really liked a trailer, but this is a bare bones release here folks.