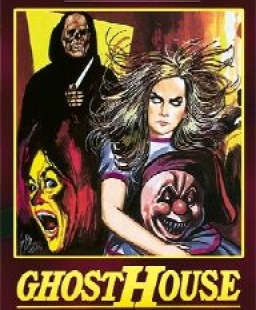 The Film– Our story starts with a father locking his daughter in the basement, so she can think about what she did. What did she do, you ask? Cut up the family cat with scissors. While she’s locked up, a zombie/ skeleton attacks the mother and father. The daughter, locked away with only her doll, eventually dies. Flash forward 20 years. A DJ and his girlfriend head up in the country to investigate a creepy radio broadcast they picked up the night before. The signal came from the house of the killings 20 years prior. Along the way they meet a prankster hitch-hiker, and a crazy old man (who looks like an anorexic Harvey Keitel). Once they finally get to the ghost house, they meet some teens there, and agree to investigate the strange mansion that night. With all sorts of supernatural terror going on that night (heads showing up in washing machines, glass breaking, and encounters with the spirit of the young girl, doll in tow), one of the teens is killed by a metal blade that flies off a fan. The police arrive, and explain the houses tragic past. The group of teens decide to stay at the house, even when the crazy old man shows up with a meat cleaver (which someone ingenuously refers to as an "axe") and the hitch-hiker settles in too. The DJ couple decide to investigate the mystery of the house further, and while chasing leads about the girl, the killings at the house resume. And that doll might not be so innocent after all… But you knew that.

Okay, this film is, of course, NOT "Evil Dead 3". It was a made for cable film directed by Umberto Lenzi as part of a four part series called "Doomed Houses". The reviews for the other "Ghosthouse" flicks will be up sooner or later. This DVD is rare. Rare as hell. A joke of a company that folded years back called VIPCO released a DVD, but it was, like almost all their releases, cut. This is the German X Rated Kult release, and it’s one of their more sought after and hard to find titles. That, plus the amazing cover, makes this a worthy addition to any German Hardbox collector’s shelf.

The bad thing is, the movie is boring. Really, really boring. It’s like a Poltergeist meets The Haunting hybrid, and it fails hard. We gets lots of talking, lots of dumb characters, lots of things that make no sense (a Doberman randomly shows up, and the killer from the first part of the movie is never explained). At about an hour and a half, there’s maybe 10 minutes of gore. Now this film is creepy. In some places, very creepy. But most of the time, the pay off is lame. Take this scene for example- we see the spirit of the girl with her evil doll, a man shambles in the room, melting to death while he’s covered in some kind of acidic chemical. The protagonist flee the room, runs up the stairs, and finds herself face to face with… a dog? Anticlimactic to say the least. With this now OOP copy going for a minimum of $80 (I got lucky and found mine for that a year ago), I’d say that hardcore fans of ghost movies or X Rated Kult collectors are going to be the only viewers of this flick has.

The Package– I’ll be really honest, most people don’t collect X Rated Kult titles for their transfers. Just throwing that out there. This looks super muggy and soft, but amazingly no print damage in site. It wouldn’t surprise me if this was ripped from a Laserdisk, but it’s much better than a VHS (which is also ridiculously rare).

The audio is like the picture. Soft, kinda monotone, but damage free. The English dub is cheesy as hell, and makes some scenes really funny. Trust me, with a minimum of 20+ minutes of talking between anything interesting, if the dub wasn’t cheesy, I would have offed myself.

This was one of the first X Rated releases (the 19th to be exact). They have gotten better at making the menus over time, but I could do a better menu with Windows Movie Maker. Aside from the text being pixelated to almost unreadable quality, I did find the Extras menu. All we get is the US trailer and 2 songs. Better than I expected, but nothing amazing.