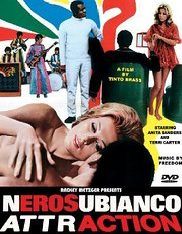 FILM- Same as The Howl, there’s not much of a plot here. In one quote, “make love not war”. We follow the surreal story of a white woman, attracted to a black man. Through several bizarre encounters, the two meet and just when it makes it’s point about interracial lovers, it blasts us into hideous violence and suffering. All this is linked together by small music video segments, with only a few spoken lines in the film.

As pop art as pop art can get, it only lacks the Campbells Soup can. The interracial lovers are an interesting foil to the Vietnam war. The music is awesome; somewhere between The Beatles and Pink Floyd. I really like the structure of the “music videos” being strung together, because it works! The chapter stops are even listed as “Select a Song” (very clever of Cult Epics) The message this film puts off might still be foul in the eyes of some Americans, dated to others; but I still love it. In many ways you could use this film to explore our current war. Not as off the wall as The Howl, however, I must say I loved both equally in different ways. The music and not-so-subtle message of this one wowed me in a way many social commentary films fail miserably at. Cult Epics has shown us a surreal side to a wild man, and with his new film Kick the Cock on the way, Tinto Brass has never been as suave. 9/10.

PICTURE/ AUDIO- I’ll start out with the bad thing; the picture is muggy, and kinda drab. Don’t let this bring you down, because the good thing is it’s taken from high grade source material. This is pretty much as good as it gets. The colors look nice for the most part, and the print damage doesn’t soil the final product. Like I said, it’s rough, but it’s the best we’ll ever get; and I think Cult Epics delivered yet again. 8/10.

The audio is a mixed bag for me. I LOVE the score, and the volume is nice during the musical bits. However, it has a nasty drop in volume in a few instances of dialog. The lack of blemishes and the overall nice volume pretty much outweighs the low-vol issue. 7/10.

EXTRAS- Cult Epics has rounded out this chapter in Tinto Brass’s career with some nice extras! We get: a lobby card gallery and some trailers for other Brass films. More than I expected, but with most “lost” films, extras are hard to come by. 7/10.