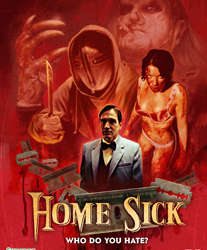 The Film- Set in a small Alabama town, Home Sick tells the story of a group of dysfunctional (to say the least) friends. Almost everyone in the group hates each other, and try to make life as awkward as they can for their least favorite members. Out of the blue, suitcase toting, polyester suit wearing Bill Mosley pops in for a visit.

After breaking in to use the bathroom, the smiling maniac subjects the group to a little therapy. He makes each and every person list who they hate, then slices his wrists with razorblades. When Tim, the craziest of the "friends" says he hates everyone in the room, the psycho finishes the hack job before heading on his merry way. No one seems to care that the people listed begin to turn up gutted, smashed, and "stretched"- after all, who would mind if the local scumbag druggie got curb stomped by a monster wearing a zippered fetish mask?

Soon they realize Tim’s little blunder might have made them all targets of the supernatural killer, and they seek the help of his chill lovin’ uncle/dad (played by genre legend Tom Towles), who just happens to love guns. As their friends and enemies (I mean just enemies, no one in this group acts like friends) are killed off, they takes one final stand against the killer… but whenever Tim decides to play a game of "Is That Gun Loaded?", things don’t go quite as planned.

Home Sick really plays on the older classic gore epics and the current alternative culture. Some characters and the wrist cutting Mr. Suitcase are obvious references to the troubled side of American youth. Every character hates the other. Really, they seem more interested in acting like jackasses and embarrassing each other than surviving.

They all seem to have very distinct personalities and compulsions, from shy and meek to criminally insane. Without the oddball cast this film would have been just another gore flick, but the schizophrenic dialog and diversity of each character makes this film a machine gun of madness fired directly at your noggin. You’ll go from being bored with one character to hating another, then you’ll be laughing at the boring character and loving who you just wanted to see get killed. That cycle repeats about a hundred times thought the movie, and makes you yearn for a padded cell.

The gore is super clean and nice looking. Some of the new low budget stuff that comes out has sloppy gore that’s more laughable than entertaining. While the effects are cheap, the quality doesn’t fall short and looks very professional. We’ve got everything from being torn to ribbons, feet cut in half, and even fingernails ripped out with pliers. The gore is really like the characters- rapid. One second he’s torturing a girl, the next he’s slashing a guy up, and the next he’s stomping some guys head. It all overloads your mind, fast.

To call this a slasher would be to insult your intelligence, and to call this a gore film would be to insult the movie. What we have in Home Sick is a superbly dark, funny, and violent indie film that falls right between the gore films of the late 70’s and the slashers of the early 80’s, yet still maintains a modern counter-culture feel. It’s one of a kind, and no single word can describe it, but it’s definitely a hell of a fun movie!

The Package– Home Sick was shot in 16mm back in ’07. I didn’t expect much damage, and I was right. Too much grain would make it loose its catchy modern alternative feel, but if it had been shot on DV I think it would have looked too polished for the retro feel. Synapse did a good job with the transfer. Flesh tones and dark shots (there’s a lot) look good, and the print damage is there. No grain at all, so the print damage just seems to be saying "Hey, I’m retro!", which fits this movie well.

The audio is clear and for the most part has nice volume. Sadly, it has a few spots where it fades in and out. This is nothing that tarnishes the finished product, because everything else sounds amazing- epically the soundtrack!

I always love to know what makes indie film makers tick, so I was thrilled to see Synapse added some director oriented material. We get: an audio commentary with director Adam Wingard and E.L. Katz, the deleted opening scene, a making of featurette, short films from E.L. Katz and Adam Wingard, and an interview with Bill Moseley. Synapse rounds out this one of a kind film with some nice extras, quantity and quality.