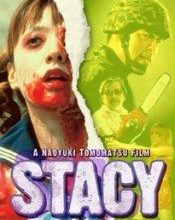 The Film– In the early 21st century, young girls from fifteen to seventeen years old suddenly clunk over, then immediately come back to life as a zombie. Prior to the transformation, they experience a state of pure mania known as Pre-Death Happiness (or PDH). The Japanese Government established an agency to deal with the Stacys, the Romero Repeat Kill Troops.

A repeat kill is the process of killing a Stacy, which requires her to be dismembered into 165 pieces. This process and number was calculated by the top researcher of the phenomena, Dr. Sukekiyo (who looks like some bizarre Elton John-Charles Bronson lovechild). While experimenting on the zombies, he realizes that certain stimuli will cause the Stacys to release a blue, sparkly substance called Butterfly Twinkle Powder.

The film then begins to introduce several character subplots. These including Eiko- a teenage girl who is on the verge of becoming a Stacy. She has no family to kill her again, so she begins to stay with a lonely puppeteer. Her carefree attitude and innocence begin to affect everyone she encounters, and she is able to bring a small amount of happiness back into the town.

Then there’s the Drew Illegal Repeat Kill team- three girls who are killing Stacys at the request of their family members for money. They hope to earn enough so they can pay someone to repeat kill them when the time comes, because they too have no loved ones.

After joining the Romero team, the newest cadet begins a desperate hunt for his "sister", Momo, deep within the base. He knows the eccentric doctor will use her for his experimentation, and hopes to find and save Momo before it’s too late.

Everything comes together when a depressed solider unleashes the Stacys from their holding cell, flooding the entire base with zombies. Through coincidence and chance, every character is affected by the flood of Stacys, and maybe they can finally figure out the cause of the outbreak once and for all.

Stacy is a very unusual movie, even from a basic standpoint. I watched the film, understood everything, sat down to do this review, and nothing I wrote made any damn sense. It builds a back story, then almost plays out like a miniseries. There’s no main character, so it feels more like you’re watching a series of short films than an actual movie- which isn’t a bad thing, it just makes it really hard to give a good plot summary.

Well, on to the actual movie. This is easily one of the most unique films I have ever watched, ranging from a gross out comedy to a borderline depressing take on romance. What really makes it work is that nothing feels forced or jumbled- everything has a smooth, seamless flow. That can create some odd emotional responses, because even I was a little taken back by how strong some scenes were.

The gore is over the top and looks awesome. There are dismemberments, heads being pulled off, chainsawings, guts ripped out, bullets taking limbs off, ect. It really has some insane effects, and while the gore is all practical EFX, there’s a few spots with CGI that don’t look really good (like some gunfire and such). Regardless, the over the top gore creates a very lighthearted, gross out feel, so there’s no reason you can’t enjoy this film.

The story was a little tricky. It’s pretty much every character in the town and how they deal with the Stacys, which can be a little tedious and I felt like some characters got overshadowed when in fact they were more interesting. That’s not to say everything didn’t fit together, because like I said everything in this film works, I just felt like the chaotic and hectic nature of the film left a few characters in the dust.

In all honesty, the gore and the comedy are the main selling points, and this movie is funny as hell. There’s tons of jabs at classic zombie films, like the Romero Troops and a T.V. infomercial for an arm mounted chainsaw called "Bruce Campbell’s Right Hand 2" (humorously mistranslated into "Blues Campbell"). There’s also some zany humor and gross out gags, so expect quite a bit of silliness.

If you’re interested in seeing a one of a kind take on zombies, then this is a must see. It’s got so much going on that you don’t even have time to think, yet everything flows evenly and creates some very odd emotional responses. It’s a smart film with some very ironic social views for a horror film, but it’s also fun enough for pretty much anyone to enjoy.

The Package– Aside from a few scenes looking too bright, Synapse really did a good job on this transfer. The quality is a little blurry, epically in the dark scenes, but it appears that was the source and not the transfer. Minor bitching aside, this is solid, good quality.

The only audio option is the original Japanese track, but Synapse has included some great English subtitles. The subs look good, and the soundtrack is well balanced and lacks any major distortion.

The only extra is the trailer, which as many readers know, I find essential. I would have really liked to have some interviews, because like I said, this is one crazy ass movie, but I’ll take what I can get. The DVD also comes with an insert containing liner notes on the film.