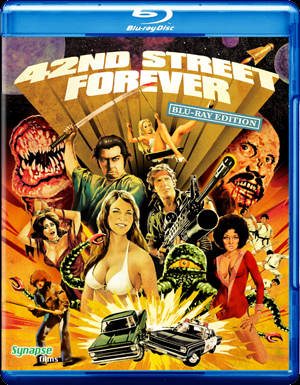 The Film– If you haven’t seen a 42nd Street Forever disk before, you’re life in incomplete. This latest outing offers almost three and a half hours of trailers (!!!) from the gritty days of cinema past. Most trailers are arranged by genre, so let’s start with a staple of American cinema, Blaxploitation.

Notable trailers in this section include Black Sampson, an example of classic Blaxploitation featuring a too-cool hero who becomes the target of rivals in the business and corrupt cops. This plot has been used countless times, from Willie Dynamite to Dolemite, but this time there are lions and beatings with a huge whomping stick.

The amazingly politically incorrect film Boss Nigger, starring Fred “The Hammer” Williamson as a black sheriff that brings order to a bigoted western town. Since it was released on VHS simply as Boss, this is one of the only times I’ve seen it promoted under the full title. And on a pathetic note, the closest thing to a black culture western to come out recently is Big Money Hustlas. Please Tarantino, make Django Unchained soon so I’m not ashamed of the age I live in.

Possibly the weirdest blax trailer (and movies in general, for that matter) is Sugar Hill. It’s your basic fair, but with a voodoo priestess who has an army of metal eyed zombies. Why do films like this cease production? Also, I wonder if this might have influenced the look of that “Stan Winston’s Creature Features” remake from a few years ago of How to Make a Monster?

Now on to the Revenge section, which also has a healthy dose of Rape and Revenge thrown in too.

Rolling Thunder, the namesake of Quentin Tarantino’s distribution company of the same name. This Vietnam vet gets revenge flick is one of my all-time favorites, and one of the grittiest, most depressing action films of all time. Sawn off shotgun and sharpened prosthetic hook hand. How can you not like this? It does need a DVD release though… *hint hint*

Act of Vengeance, which many of you will know as Rape Squad. An orange jumpsuit, hockey mask wearing rapist meets his match when a gang of past victims team up to take him down. This is one of the best rape revenge movies of all time, and any movie that has a group of women beating a mannequin with RAPIST Sharpie’d on its chest is a winner in my book. Very reminiscent of Savage Streets and The Ladies Club.

There are also some trailers to classics of the subgenre like Abel Ferrara’s Ms. 45 and the Synapse classic release Thriller: A Cruel Picture.

And now for some of the classiest films to ever be produced in the grindhouse era- Sexploitation!

One of my favorite trailers of the series (it was originally included on The Deuce) is Ginger. Basically imagine James Bond fucking everyone and you get the idea. Wait, um, how about Bond fighting drug pushers? Shit, er, it’s Bond with tits. Ah fuck it, close enough.

The U.S. trailer for the Christina Lindberg sleazefest Exposed makes an appearance too, only it’s under the alternate (and much cooler) title The Depraved. If you’ve ever seen the film, you’ll know half the shit they say in the trailer is an outright promotional lie. It’s a little less rape-y than they make it out to be…

One that really interests me is Invitation to Ruin (another favorite from The Deuce), which from what I can gather is another “rich men getting away with sadistic antics in a dungeon” go around. It just looks mean though. I’m talking really, really mean.

This is probably the largest grouping on the disk, and I haven’t even touched most titles. A few that stand out are Chained Heat (classic WiP fun), Teenage Mother (just because this concept was so forbidden almost 4 decades ago), and the caveman sex yarn When the Women had Tails.

The best years of Sci-Fi were from the 70’s to the mid 80’s. Not in terms of production quality, I’m talking pure mindfuckery here. These next films will make Zardoz look like The Straight Story.

I have no clue what the flying fuck Starcrash is, all I know is i must see it as soon as possible. If you have a copy you would be willing to donate, I will send you a thank you letter penned in my own blood or semen, your choice. I’m cool like that.

Instantly bringing back memories of its Prism VHS release is Raiders of Atlantis, a cross between Mad Max, Eaten Alive, and The Tenement (with a little touch of The Cars that Ate Paris). Movies like this are what make my life worth living. It’s kinda like the sci-fi action equal to Bruno Mattei’s Hell of the Living Dead. Also, I never noticed how much Atlantis looks like Detroit…

One of the only foreign films showcased is Matango, a Japanese film about sailors who wreck onto a deserted island during a storm. On the island they find a rotting pirate ship, which may or not contain some red glowing evil thing (editing fail, I wasn’t trying to be ambiguous there), and… killer mushrooms. I ain’t even shitting you right now… Hippies beware.

More awesome trailers include the grotesque Alien rip-off The Deadly Spawn (review here), the cult classic The Green Slime (second best theme song of all the trailers on the disk, right under Boss Nigger), and the Body Snatcher-esque They Came from Beyond Space.

And now on to the trailers you’ve all been waiting for- the horror section.

The Dark, a failed zombie movie turned alien mutilator piece of tripe that must be seen. Basically some footage of a zombie film was shot, and people hated it. What’s the logical thing to do? Freeze frame the zombie, add FUCKING LASERS SHOOTING OUT OF HIS EYES, and get William “Rolling Thunder” Devane and John Saxon to star.

Continuing with tradition, there is a trailer for another film by Charles B. Pierce. This time it’s The Evictors. Keeping in theme with his most well known The Town that Dreaded Sundown, this southwestern horror film stars Michael Parks, Vic Morrow, and Jessica Harper. Somehow I’ve never heard of this one before.

Possibly the most nonsensical and retarded trailer of all time is for the double bill of I Dismember Mama and The Blood Splattered Bride. It’s a fake news report at a theater showing people going insane from watching. I promise you; by the end of it you’ll feel homicidal too.

Just in case you were in the mood to see real mutilations and shit of the such, there’s a few Mondo film trailers here too.

The somehow infamous Secret Africa is probably the coolest trailer in this section, mainly because the film is so hard to track down. Somehow I ended up in a FaceBook group where people were trying to track a copy down (don’t you just love that shit?), and apparently this a genuinely shocking and almost impossible to find film. I was really happy to finally know what the flying fuck this movie was about.

There are only two other Mondo trailers, Shocking Asia, which I promise lives up to its name, and Taboos of the World.

This is what I like to call the WTF section of the disk. It’s only two trailers- Chappaqua, based on the drug addiction of Conrad Rooks (and featuring an appearance by one of the best writers of all time, William S. Burroughs), and Salo: or the 120 Days of Sodom, the incredibly disturbing classic by Pier Paolo Pasolini. And now that we have the arthouse-ish title out of the way, let’s move on to brutal action films.

Notable titles are The 44 Specialist (because The 44 Magnumist would just sound stupid), a machine gun maniac flick aptly named The Bullet Machine, and Death Drive, which I’m sure most of you will know as Hitch Hike, the Franco Nero vs. David Hess classic.

Now time for some Kung Fu, and the fun begins with a Cripplesploitation film The Crippled Masters. Remember the no-legs guy who would piggyback on the no-arms guy from El Topo? Well imagine both of those guys kicking a ton of ass with their crippled limbs. A great companion piece to The Amazing Mr. No Legs.

There’s also SuperManChu, just in case you thought Christopher Lee as Fu Manchu needed a little more schlocky-ness, and Shogun Assassin, the US edit of the first two Lone Wolf and Cub films into one movie.

And on to possibly the most overlooked sub-genre of the era- biker films baby! The most notable in this section has to be Hells Angels on Wheels, which stars Jack Nicholson. Other fun trailers would be the (possibly one of a kind) gay biker flick The Pink Angles, and the super cool horror-biker hybrid Werewolves on Wheels. It’s billed as the first horror motorcycle movie ever made, and since it came out the same year as Psychomania, that might not be bullshit after all.

Everything comes to a close with the comedy section, which unfortunately I’m not a huge fan of. Not the trailers included, but just 70’s and 80’s comedies in general. But I’ve talked on that many times before, just bringing it up to explain why this section won’t have much commentary.

First is Super Fuzz, which from what I can tell is a version of Inspector Gadget that doesn’t look abysmal. There’s also a sex-and-hang-glider beach movie, Sunset Cove, and Skatetown USA, which I’m sure would drive me to suicide since it looks like a full length movie full of Chris Tucker’s character from The Fifth Element.

Overall there really is something for everyone, and Synapse has done an almost perfect job of picking their most entertaining trailers from past releases, and finding new content all the same (at least from what I can tell, I’ve only seen three of the DVDs). With everything from a politically incorrect Blaxploitation western, to a sci-fi trip to “Atlantis”, to an Amish slasher… to a Kung Fu epic staring deformed actors. If you’re a trailer junkie from the good ol’ days, this is your bread and butter.

The Package– Everything has a raw and gritty look, that’s the nature of the beast. I doubt anyone will expect everything to look like brand new, but I must say this transfer is a very tight and looks as good as any collection of forgotten snippets of celluloid possibly could.

Audio is nothing more than people “daring you to see”, expressing the “shocking nudity in”, and inviting you to take “one wild ride”. There’s the obligatory damage here and there, but everything is audible and sounds great considering.

Basic Synapse Blu-Ray tabs again, and everything works fine. My only issue is some of the trailers with long titles are hard to read on the trailer selection, but other than that this is the quality from Synapse we expect.

The only extra is an audio commentary with AVmaniacs’ Edwin Samuelson, Fangoria’s Michael Gringold, and Temple of Schlock’s Chris Poggiali. I miss the T.V. spots from some of the prior disks, but then again, they didn’t have THREE HOURS of trailers.