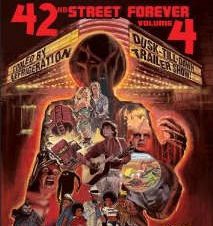 I’ll admit I had thought they ran out of steam with Volume 3, because it seemed slightly lacking when compared to it’s predecessors. I was skeptical when hearing about this newest incarnation; and I knew it would either make or break the series. I’m happy to say I was thrilled with this collection! The trailers are fantastic- sleazy, intense, action packed, funny as hell, and most boasted the fashionable sexy feel that retro-cinema puts out.

Some highlights are: The Town That Dreaded Sundown, Fighting Mad, Breaking Point (there were a few Bo Svenson titles, actually), No Blade of Grass (had a very Long Weekend feel to the trailer), Bonnie’s Kids, The Boogieman (a childhood favorite), Rituals, Humongous, Mortuary, and Legend of Boggy Creek. Only one seemed sub par, and that was Embryo. Overall I feel the balance worked out nicely; with action/ horror films mainly at the front of the reel and sexploitation and comedies at the end of the line up.

The main reason people pick these up are because of the exploitation trailers, so I was very pleased to see a majority of those. Synapse Films has managed to entertain for four years with this series of previews only, and this shows they’re not slowing down anytime soon. 42nd Street Forever is kinda like the anti Tivo, making you crave trailers rather than fast forwarding them.

The Package– It’s grainy, it’s damaged, it’s vintage. What did you expect, Beowulf? The charm of grind house cinema was the roughness. It was unpolished, trashy at times, and full of imperfections. For one, you can’t restore these trailers and TV spots to Blu-Ray quality, but Synapse Films has cleaned each trailer enough to where it’s enjoyable to watch and doesn’t make your head hurt from squinting to see the title card, but still has the aforementioned charm.

Anytime you deal with multiple pieces of film, you run the risk of one being so quiet a bat couldn’t pick it up, to the next being so loud it busts out the windows. I’m amazed Synapse found a medium range for each. While these trailers aren’t the same volume, you won’t get arthritis in your thumb from alternating between the Vol. + and Vol. – buttons. Not polished by any means, but, same as the picture, cleaned enough to be enjoyed to it’s fullest ability.

We get an audio commentary with Fangoria editor Michael Gingold, film historian Chris Poggiali and AV Maniacs editor Edwin Samuelson. These guys really know their stuff, and it’s interesting to hear what they have to say. Also you get some vintage TV spots. Not as cool at the trailers, but most of these are WAY better that the TV spots we have now (GI Joe ring any bells).