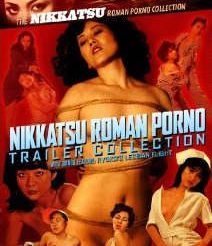 I’m not even kidding on the rape stuff. Probably 2/3 of this collection is softcore rape titles. It’s nothing compared to the likes of All Women are Whores or the Flower and Snake series, but there’s some pretty rough looking titles on here (Sex Hunter and Zoom In: Rape Apartment). Most of them are that hokey "rape victim ends up enjoying it and coming back for more" stuff, but coming from the same culture that released an entire series of films called Rapeman, that’s not saying a whole lot…

The other dominating sub-genre showcased on this collection is the sex comedy. Examples include Pearl Divers: Tight Shellfish and Office Girls 9 to 5. Just like the rape films, some of these really stick out, and others seem to fit the mold. There’s some goofy things like a guy who cross dresses to get closer to women, and the whole shellfish theme is pretty funny (unfortunately for me, it just brings back memories of those abominable Japanese hardcore fish sex films). Aside from plot, half of them just have ridiculously retarded titles like Nurse’s Dormitory: Assy Fingers.

Now, there’s some totally unique trailers scattered around in here, and it’s like finding a diamond when they pop up. The coolest looking one was Affair in the Early Afternoon: Kyoto Tapestry, and it looked like a surreal sex drama involving a cemetery. Another cool one is the sex/ blackmail/ crime/ revenge film Race Across the Drenched Wasteland, which is styled to look like a Eurocrime flick.

The Package– Impulse has presented these trailers in super clear anamorphic widescreen. There’s no major print damage at all, and considering these films were made from 71 to 88, that’s a damn impressive feat. I REALLY hope the films look this good when they come out, because this is one of the overall best looking trailer comps I have ever seen.

The audio is a standard Japanese track with some flawless, if not a little too literal subs. You know how there’s those English sayings that, if one were to translate word for word in another language, would sound just plain stupid? Sayings like pop a squat. Yeah, there’s a few translations like that in here. It’s pretty humorous, but some of them are ridiculously absurd. Subtitles aside, the audio and soundtrack are clear, evenly balanced, and have nice volume.