I Melt with You Movie Review 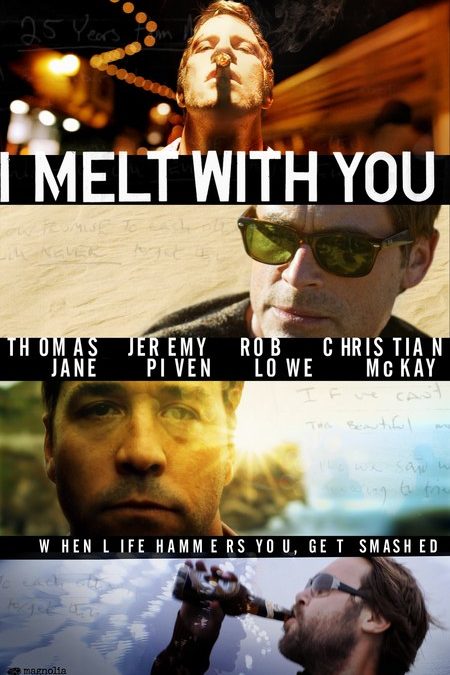 The Film– Every year for one weekend, college friends Richard, Jonathan, Ron and Tim all meet up for a weekend of living just like they did back in school. This consists of drinking enough booze to sedate a heard of buffalo, and popping/snorting more drugs than Tommy Lee during an entire tour season. This meeting is special though, because not only is it Tim’s birthday, but also the 25th anniversary of their reunions.

Richard is a high school English teacher, Jonathan is moderately popular doctor, Ron is a wealthy stockbroker, and Tim is a professional at being depressed. The group all agree to meet at a beautiful beachside rental house in Big Sur, CA. Tim arrives to find Richard already a few lines deep on his bam-bam, and tries to talk with him about something that’s been troubling him. Whatever it is, it seems to be connected to a wrinkled piece of paper he’s been carrying around.

Richard rebuffs him, reminding him the weekend is geared for having a good time, not serious conversations. Realizing his concern is falling on deaf ears, Tim goes with the blow (there I am with that Joel Siegel shit again) and starts riding the white pony too. Soon Ron arrives, and after sharing one sentence about his family automatically begins guzzling the liquor that lines the kitchen. Eventually Jonathan arrives, medical bag in tow, and the party really gets started when the friends start eating the contents like a fat kid with a bag of Skittles.

After some jokes (which are actually pretty good, especially one where Jonathan fakes having sex with a sedated patient) and reminiscing about how fantastic their lives used to be, the friends slowly wander off to fall asleep alone. Keep this in mind. When they wake up, it’s right back to the partying. A few pills here, some whiskey there, and oh, is that cocaine I smell? Pass that shit! You get the idea.

Again Tim tries to talk with his friends, only to have Ron break down into tears because of the impending legal troubles awaiting his arrival back home. It turns out he’s been ripping off his clients for years now and the government isn’t too happy about it. Oh and Jon being a doctor and all? Well, people walk in and slip him a few Ben Franks, and he forges prescriptions for high dose painkillers for them. See where this is going people?

The third day arrives, and since they’ve done nothing other than snort enough coke to alarm Pablo Escobar (and completely demolish the motor in a Porsche, which is totally designed for sand dunes by the way), they head out to do some deep sea fishing. The only person to catch anything is Richard, and he’s the lucky guy who snags a huge dose of sea sickness (hey buddy, Bud Lite won’t fucking help that). But all is redeemed when he uses his rugged good looks and outstanding charm to convince a waitress to bring some friends and party with them.

With Jonathan and Rob having already talked a bit about their lives, Richard reveals he is a failed writer who wasn’t “cynical” enough to be taken seriously. Eventually everyone except Tim pisses off the young partiers, and stagger to their individual rooms to crash- realizing that nothing, not even being around people the exact age they wish to be again, will improve their lives.

By morning all the youngsters have left, and the friends awaken to find Tim hanging from his belt in the shower. That morning he killed himself while his friends slept off the previous night. When they all find him, everyone realizes just how serious what he was trying to talk about was. They also find a pact written by all of them on a piece of paper that Tim has been carrying around for 25 years, signed in blood.

It’s a suicide pact that states if they can’t remember what it feels like to live as free and happy at they did back then, then on this particular anniversary they would die as one. Tim’s death and the contents of the note cause the three remaining friends to reflect on how shallow their lives are, and eventually they begin realizing death is the only way to escape their miserable existence. But things get a little more complicated when the local sheriff becomes suspicious of the foreign, strung out looking men who have rented the beach house for the weekend- especially as they start missing one by one…

Before I mention anything else, I have to say this is one of the best films of the past decade. I haven’t seen a movie with such brilliant acting, cinematography, editing, writing, and soundtrack in years. And yes I’m aware of the almost 50/50 split on review out there of people who either love it or hate it, but to me, this is a deeply troubling film that’s incredibly well put together.

The friends do nothing other than drink and get super fucked up on a variety of drugs. When they’re high, they shoot the shit and reflect on the past. They only share their current lives by briefly flashing photos of their families or summing up the past year in five words or less. When they’re not high, they retreat to individual rooms, showing just how weak they really are without the drugs- even when together.

This pattern sticks all the way until Tim’s death, then they all seem to huddle together for security, high or not (but more than likely they are). Jonathan seems to be the one who binges on the drugs more than anyone else, and constantly looks devil-eyed and strung out. He’s pretty much the personification of the gang’s contradictory nature, which is shown by him being a doctor and chain smoking constantly. This only gets worse when the pact they all made seems to be up for consideration.

The performances are phenomenal. Thomas Jane steals the show as an emotional husk of a man, an impressive switch from his most famous role as The Punisher. Lowe and Piven also give completely convincing acts of living a bittersweet, tortured life. Piven pretty much begins as his iconic Ari Gold from Entourage, but by the end he turns into possibly the saddest and most depressed character in the whole film. McKay as Tim, while not having the emotional range as the other actors, still puts on a great show as plagued and emotionally weak.

While I do love this movie, it does have a few issues. The pacing is a little hazardous here and there, and some of the supporting cast are just cut-out characters. I’ve also read a few reviews with people hating the sheriff character because of her almost instantaneous suspicion of the guys- but living in NC, and having traveled through some pretty small towns in this state, I promise you this shit happens. If you’re not born there, and you look like you might possibly do something wrong, they’re on your ass. Maybe no to the extent of what Rambo went through, but close enough.

The filming and cinematography are almost a character on their own. The picture mimics a hangover or a pill buzz, going for blurry, sluggish shots and fast paced time lapses respectively. Director Mark Pellington had an extensive career in music videos, and you can tell, but amazingly it enhances the feel of the movie (unlike almost any genre film “directed” by people in the same field). With rapid edits, distorting lighting, and music blaring all the time, this is about as anti-Dogme95 as you can get. And that’s a good thing.

I don’t want to go into too much detail with this, because this is a film review- not reflection. One of the biggest reasons I wanted to see I Melt with You, and possibly one of the reasons I loved it so much, is because my friends and I act like this constantly. Not saying we’re choking down pain pills every night and writing suicide pacts like they’re going out of style, but even as young as we are, we can already see a pattern in our lives. Get drunk, then reflect on everything we’ve ever done since we started hang out. If there’s one thing this movie nails, it’s the constant reflections of the past and how you will never have it back.

Possibly one of the most emotionally draining movies I’ve ever seen, I Melt with You is a fantastic and depressing look at how all those choices in your life can come back to haunt you, and how feeling on top of the world can result in the worst feeling you’ll ever experience. It is by far more of a figurative story, but the execution leaves you with a sense of warning and sympathy for the main characters. Despite some pacing issues here and there, and some pretty static supporting actors, I Melt with You demands your attention. This is a fantastic movie.

The Package– With the filming giving some scenes that blurry, distorted hangover-esque feel, it’s kinda like shooting fish in a barrel for Magnolia here. The colors are great and the print is beautifully clear, but you can tell there are some sharpness issues here and there- despite the filming. Not enough to ruin the picture of course, but just enough to make the background a little choppy looking in some places.

The audio mix is a booming 5.1 DD track that sounds great. Proudly blaring the almost heartbeat like main theme (which reminds me of the music used on the trailer for Eraserhead, actually), as well as a good many punk and early alt rock songs- not to mention countless man-screams and bro-calls. This is a clear, balanced transfer that showcases the very important soundtrack, but still respects the rest of the noise.

his release comes with two commentary tracks- one with Pellington, Piven, and Lowe, and the other with Pellington and the Co-Writer and Director of photography. Also included is a statement by the director, deleted scenes, a behind the scenes featurette, the HDnet early look footage, interview with Jeremy Piven, and half a dozen trailers and photo galleries. This is by far one of the best disks I’ve looked at all year.