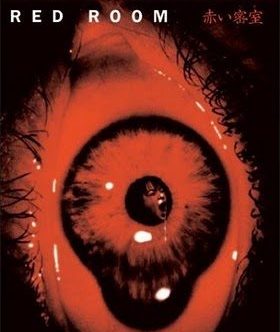 The Film– Four people sit in a room with only four chairs, four cards, and a table. The lights are blood red, and there’s a cell in the back corner that has some very interesting items in it. They are competing in the King Game. Each person draws a card, and the one with the crown on it is the winner of the match. The winner then commands two losers to go in the cell and torture each other for two minutes. If you quit, you lose the game. Last person standing wins 10,000,000 Yen, and all of the players are desperate for that cash.

Daisuke Yamanouchi is really the bad boy of cheap Japanese horror. His movies are always entertaining, and as goofy as they are nasty. While Red Room is nothing compared to his infamous Mu Zan E, it does have some pretty sick shit. The players start out with mild tortures like making two girls kiss and being spun in an office chair, but quickly escalate into things like a hairdryer down the throat and tons of sexual violence.

Red Room is not to be taken seriously in the least. The characters make the dumbest expressions to show surprise and panic, and the really nasty bits are so farfetched that you’re already out of it before they ever start on each other. It’s a nasty movie with a high fun factor, but don’t expect anything really harsh like Niku Daruma or Guinea Pig. If you like Japanese horror, then go in with the intent to have a good laugh, maybe a squirm or two, and you’ll have a blast.

The Package– Yamanouchi shot this on DV, so the quality is lacking. Unearthed did the best they could with what they got, but there’s still tons of pixelation. There’s an annoying line going across the top of the screen at all times, but after a while you do zone it out. Not the best transfer out there, but taking into consideration the DV, it’s about standard for a film shot in that format. Plus the red looks nice, which is a color that shows up in about 90 percent of this movie.

The audio is, same as the picture, to be expected with DV. It’s pretty monotone, but the sound effects (which were obviously overdubbed in) are super loud. This adds to that over the top humor I was talking about, and the sexual effects sound like someone put Spongebob through a garbage disposal. The subtitles are pretty good, with only minor errors (simple things like putting a semicolon instead of a colon to represent time). Seeing as how this is the only set of English subs available, I really think Unearthed did a good job translating this bizarre flick for Western audiences.

Unearthed has added a photo gallery and some trailers. The first is for Red Room, and the other eight are for other titles in the Unearthed catalog. Pretty good selection for a film this obscure, and you can really see the quality they put into their releases.